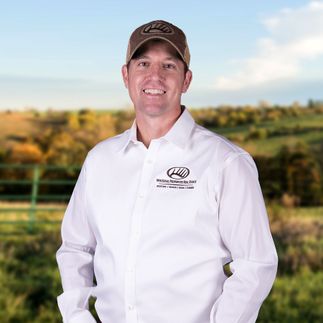 Wesley McConnell is a Whitetail Properties Partner, CPA and Land Specialist in Louisiana and Arkansas.

Wesley’s parents both grew up in rural communities. His family’s lifestyle lended itself to outdoor recreation and land ownership. Wesley’s experiences with land have greatly shaped how he chooses to live his life through what he chooses to do for fun and how he earns a living.

An avid hunter and outdoorsman, Wes began hunting at a young age with his father, brother, cousins and grandfather. He went dove & duck hunting before the age of 7, and shot his first buck at age 8. He began to bowhunt at age 12 and went on his first gator hunt when he was 16. Wesley would eventually gravitate to hunting with a recurve, which he did exclusively by the time he was in his early 20s.

Wes is a Certified Public Accountant, who earned his Master’s degree in accounting from Louisiana Tech University. Before his career in rural real estate, Wes worked at several non-profit organizations doing ministry work. In Costa Rica, he became fluent in Spanish. He’s also had experience in the media industry, where he’s worked as a videographer, video editor and television producer.

He joined Whitetail Properties at its inception in 2007 and worked in the Pittsfield, Illinois offices for 8 years. At Whitetail Properties, Wes has assumed a variety of roles over the years: video editor, copywriter, producer, accountant, recruiter, broker, CFO and he is serving rural landowners as a Land Specialist. He’s currently licensed in Arkansas and Louisiana and has previously been licensed in as many as seven states.

He currently owns rural properties in Illinois, Louisiana and Arkansas, while he’s bought and sold land in Oklahoma, Iowa, Missouri and Kansas.

Wesley and his wife Elise reside in Ruston, Louisiana where they are the proud parents of three young children.